How we got from a simple post of a youtube clip of Chris playing blues to
discussing his deeper personality traits is beyond me. Now we're
discussing the relative merits of the evaluations and that is most
certainly meta discussion. It's also off topic. If Chris were alive I
wouldn't have been allowing any of the second order discussion simply
because it would not have been polite to do so. He's obviously not here
to defend himself not that a defense would be on topic and it would still
be meta.

I'm not saying you can't talk about Chris, God rest his soul. I'm saying
please stick to our topic all things harmonica and absolutely stay away
from the meta discussion of parsing the various evaluations of Chris's
difficult to comprehend personality. Oddly I think he would have been
amused by this discussion. harp-l-listowner

I'm not defending suzukis prices because it seems high, but also consider that there is always 50 to 100 percent markup in anything you buy in retail whether it is an iPhone or clothes. I know someone that sells designer jeans for 100 bucks and pays a few dollars for them. I think retail clothing markup is the most offensive.

But there is a reason for this. Suzuki USA is not suzuki. They probably buy them at 80 cost from Japan. Then they have to mark it up to make a profit. If it is not 20  to 30 percent or more you cannot stay in business. You have thousands of dollars on the line in inventory, employees to handle service and orders, taxes, etc. the markup has to pay for that. Every business works this way. Even in harmonica. Now Suzuki buys tons of these harps but they don't have the manpower or reach to get them out there... They have to make it attractive for dealers to carry it. If a dealer is not making a decent cut they will not carry it and the product won't sell. This is how stores make money. When you are buying from a dealer you are paying for the product, their service, technical support, their time etc. if they only made 5 bucks on something they would go out of business too.

How many times have you called a dealer and asked them questions on the phone? That is their time that needs to be paid for. In my case, most of what we sell we make in house so I can keep prices lower but I just got harangued recently on another forum for the price on an item that we were selling as a dealer. We literally make 15 dollars profit on the thing and this guy was acting like we were raping people. Keeping in mind that we have to buy huge amounts of them at a time so
Money is tied up. I have to take time supporting the product, answering questions, and most importantly what is built into the price is the expertise that I'm offering like in this case the free video on the product I spent hours making. It's not uncommon For me to spend 30 minutes answering questions to a customer about screws. Don't get me wrong I love it, but I cant sell stuff at cost or I would be homeless.

If Suzuki cut out the middle man then you would buy from them direct and likely get no service. No questions no help no love! So keep in mind that you are paying for the service and there is a lot of service required on harmonicas. Maybe not right away but eventually you will suck up their time when you have a problem. I've heard Suzuki is really good on warranties and repair that has to also be worked into cost.

Now, there are certain things that are overpriced. selling cover plate screws at 4 bucks each yes. Best buy stores selling monster cables for 50 bucks when they cost 5 bucks absolutely ( my friend worked there). But most harmonicas have been undervalued and underpriced for years. It's only recently that they are more where they need to be. I think we all have it in our minds that they should be cheap because they were cheap for so long. I know I had sticker shock when sp20s jumped from 18 to 35 bucks but honestly it's ok because i think they are worth that. Consider that nearly every major harmonica company including Hohner and Seydel nearly went out of business and/or had money problems. Why? Harmonicas are too underpriced. Think about What it is. The best sounding instrument in the world with 20 or more working reeds, expensive screws, expensive coverplates, hand tuned...fits in the pocket! I'll stop now. 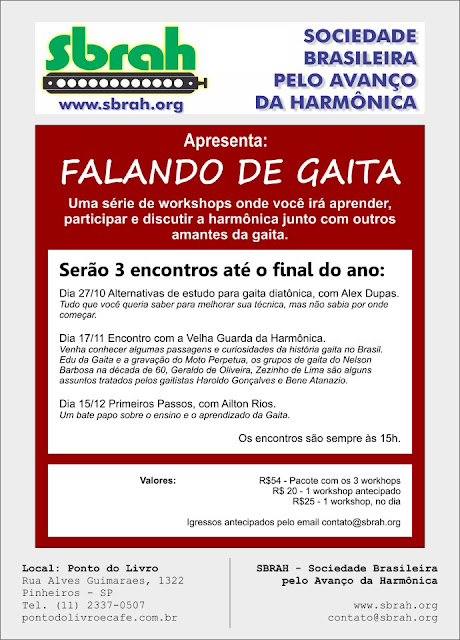 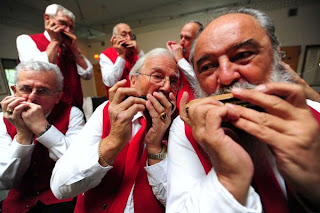 Here's a link to that first month and the text of the first post.  If you
read past the first week things begin to pick up.  There are actually more
than a couple of people still subscribed to harp-l who were around pretty
much as the list began.

Harp-l began as a humble student run LISTSERV hosted on the Western
Kentucky University computer systems.  The original listowner was Chris
Pierce.  When it was no longer possible for Chris to run the list we were
forced to find a new home, we settled at Garply systems and we were run by
Hugh Messenger. An interesting time and the the list was hopping.  Our
peak post volume occurred in this time frame.  Hugh's life changed and he
was no longer able to keep up with the tasks of list ownership.

We continued to be hosted by garply and later the entity that garply
became.  SPAH at the behest of Douglas Tate covered the costs of our
hosting.  Initially Danny Wilson and then later a team of 3 took over the
ownership duties.  The team of 3 included Michael Polesky, Ken Deifik and
I believe Robert Gaustad.  Michael quickly became the last man standing
and ran the list for years with the assistance of Jonas Karlsson and a
small team of volunteers called harp-l-workers.

Our Garply hosting became less reliable as the company's interests,
ownership  and focus shifted.  If you peruse the archives you'll notice a
gap.  That gap was generated by a Garply disk crash.  Michael personally
paid to have the disk replaced in a era when a replacement disk for a DEC
Alpha was close to a thousand dollars.  Years later Michael paid to have
the 2nd Garply disk data recovered when it was shipped to me loose in a
box damaging the drive.  All of the harp-l archives including the gap era
were recovered.  The reason they are not currently up is they have
formatting issues.

>From Garply we moved to a new host whose name currently escapes me.  We
did acquire the use of the name harp-l.com at that time.  Dave Gage
generously obtained the domain name and paid those fees for years for us.
Our hosting was unreliable.  We were off line for a couple of months
twice.  Membership being loyal we always bounced back but it cost us.
Other resources became available and harp-l has never again been as
prolific as it was during the Garply era.

I've been involved with harp-l since the WKU era.  I became involved with
the harp-l-workers group during the Garply era and during the middle of
the Michael Polesky era I was in many senses the person running harp-l.
Frustrated with our hosting I teamed with Ben Nathanson another long time
harp-l member to find a better more reliable way to keep harp-l afloat.

We ended up acquiring the harp-l.org domain name and used it to test
hosting sites .  We got lucky and our second hosting choice, rimuhosting
ended up working perfectly for us.  We set up parallel lists using the 2
domain names.  This way we were able to beta test the new system while
still maintaining the old list.  We switched from our long time mail list
software, Majordomo, to our current system Mailman.

On July 30, 2004 harp-l was finally hosted on its own server with control
over every aspect of the system.  We own the domain names thanks to Keith
Graham and Dave Gage who generously allowed us to acquire them.  We are no
longer SPAH supported, we've been independent since the server switch.

So thanks to Chris Pierce our founder and each and every one of you who
helped along the way.  That a student run internet list started before we
had web browsers still exists today is more than a minor miracle.
harp-l-listowner

This listserver is for harmonica lovers/players/enthusists/and any one
else that is interested.

This is not for any one particular style of music.  I hope that
through this list much can be learned from all different forms of
harmonica playing.

Blues, Jazz, Swing, Folk, Country, Rock, and ALL others are welcome.
If you have questions or if you would like to share your ideas,
experience and knowledge, please feel free.

It will probably start out slow, but after a while I think this list
should work out well.